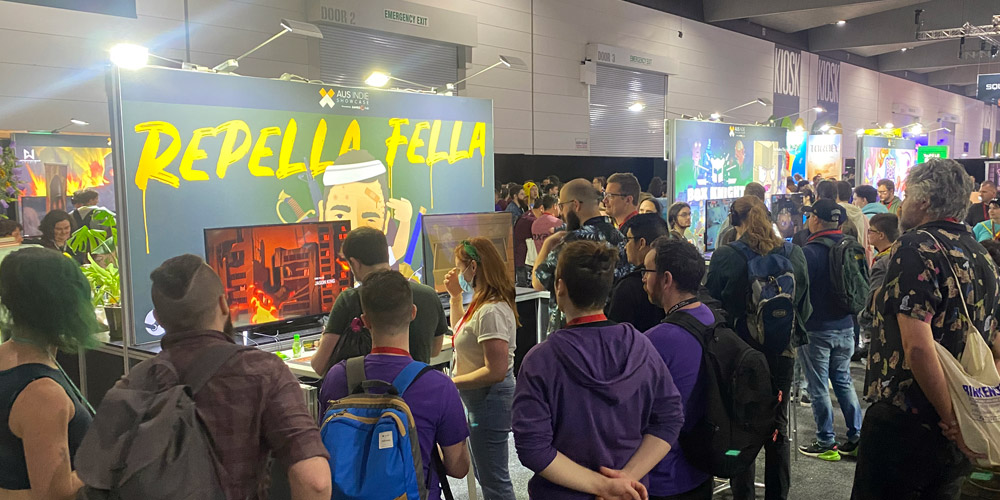 After what feels like the longest and busiest weekend of my life, I’ve arrived home from PAX Melbourne 2022.

Repella Fella was chosen as one of six video games to be displayed in the Aus Indie Showcase by GamesHub. Not wanting to miss out on this amazing opportunity, my brother and I hopped on a plane and flew down to Melbourne to demonstrate what the game is all about.

I’ve never been to a large gaming event, and going to PAX was something I had always wanted to experience. To be invited to demonstrate my own game as well as visit PAX was an incredible honour.

With a tiny gaming PC, a Steam Deck and a MacBook Air, we were ready to let the public see and experience the full build of the game for the first time. On the left screen was the playable PC version with keyboard and mouse.

On the right was a looped video of the game being played from beginning to end. On the Steam Deck was the full version which could be played numerous ways (thumb sticks, touchpads or touchscreen). We had stickers, business cards and t-shirts to give away. 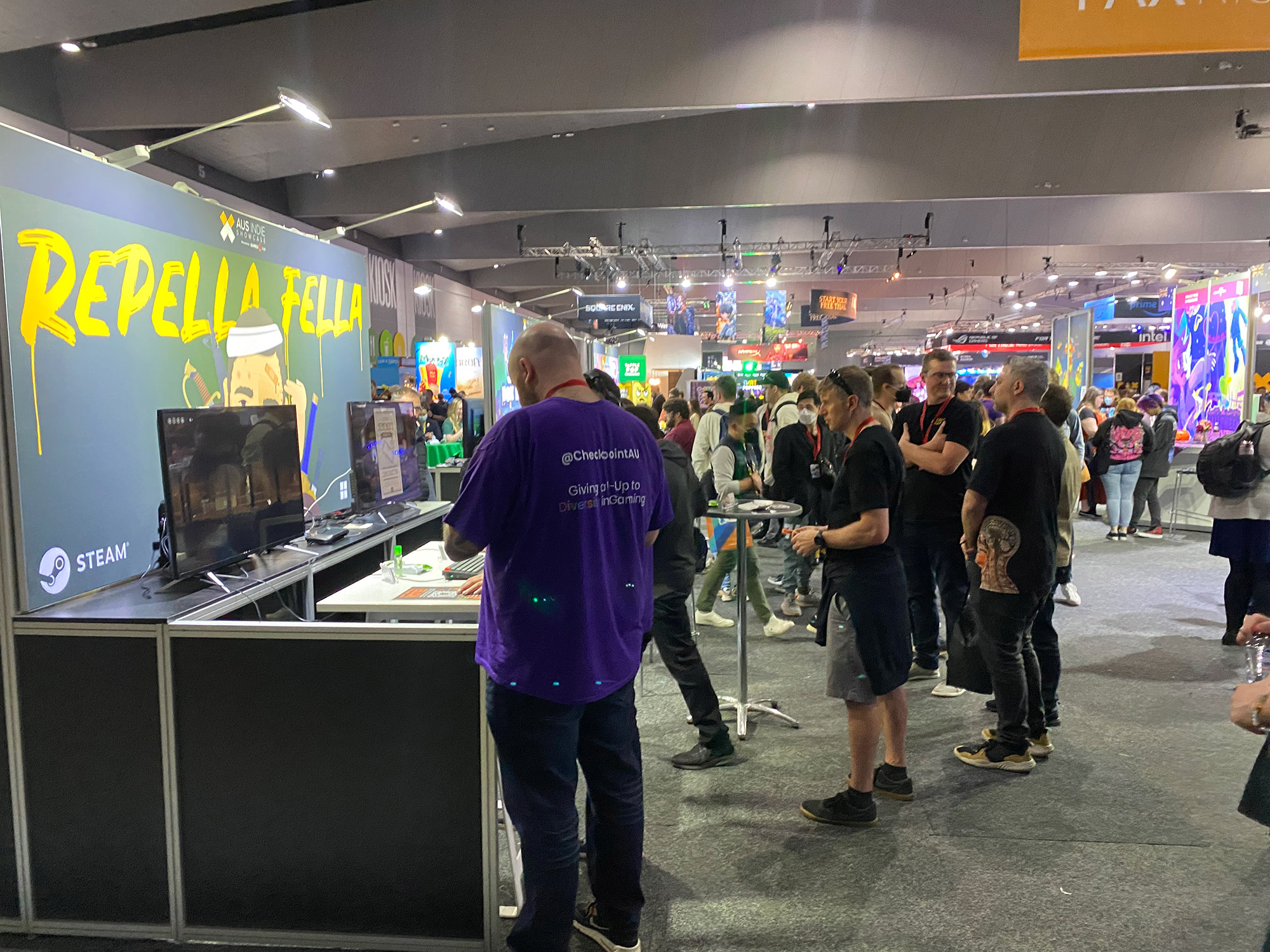 The very first people to experience the game was a young family, two parents with a young child. During the tutorial levels, one family member chose to booby trap a sleeping soldier’s bed with a grenade. Seconds later, the grenade exploded. The soldier died in an incredibly violent, yet comical way. I thought they might walk off in a huff. Instead, they all burst out laughing. Phew!

Overall, it went really well. People were way more interested in the game than I had anticipated. Observing visitors crowd around the screen as someone made choices was great to see. Watching them erupt in laughter as the character fell into a trap or was unexpectedly killed was great, and the feedback will help immensely moving forward.

As the day went on, more and more people visited my booth. As I expected, the Steam Deck I had brought along turned out to be a huge draw card. “Is that a Steam deck?!” had to be one of the most commonly repeated questions I overheard people asking one another. 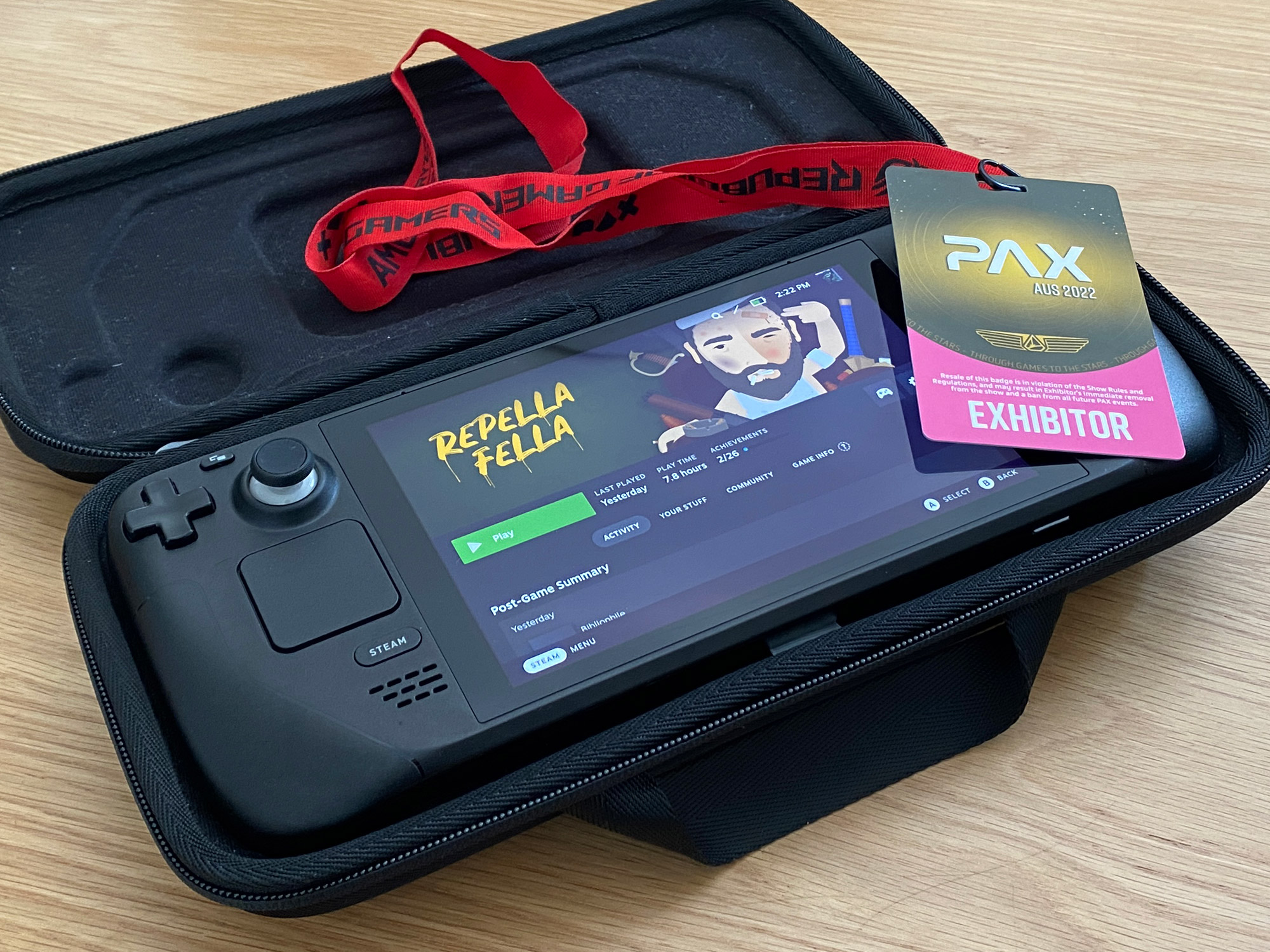 Why yes, it is a Steam Deck. And it's running my game! Perhaps you'd like to give it a go?

One thing I didn’t realise about the Steam Deck was how accessible it made things for all gamers. Two friends enquiring about Repella Fella wondered if they could play it with a gamepad. I did bring a gamepad, but the bluetooth connection kept failing, so I referred them to the Steam Deck instead. One friend turned to the other and asked him to demonstrate how he played games using just one hand on the gamepad I had brought along. It was then that I realised he only had one hand.

The way he was gripping the gamepad wouldn’t quite work with the Steam Deck as it would a Xbox One controller, so allowing him to test the game was tricky. I thought about it for a few seconds and remembered that the Deck has a touch screen. With no additional work on my part, this person had the ability to play the game by using a single finger to walk around, inspect items and explore the world. It just worked. Thanks, Valve!

It wasn’t until a few hours into the event that we realised all of the wireless devices we had brought with us were failing. The mouse, keyboard and headphones were either bluetooth or had dongles, and so people weren’t able to play or hear the game properly. We later learned that this is a common occurrence in the PAX hall. 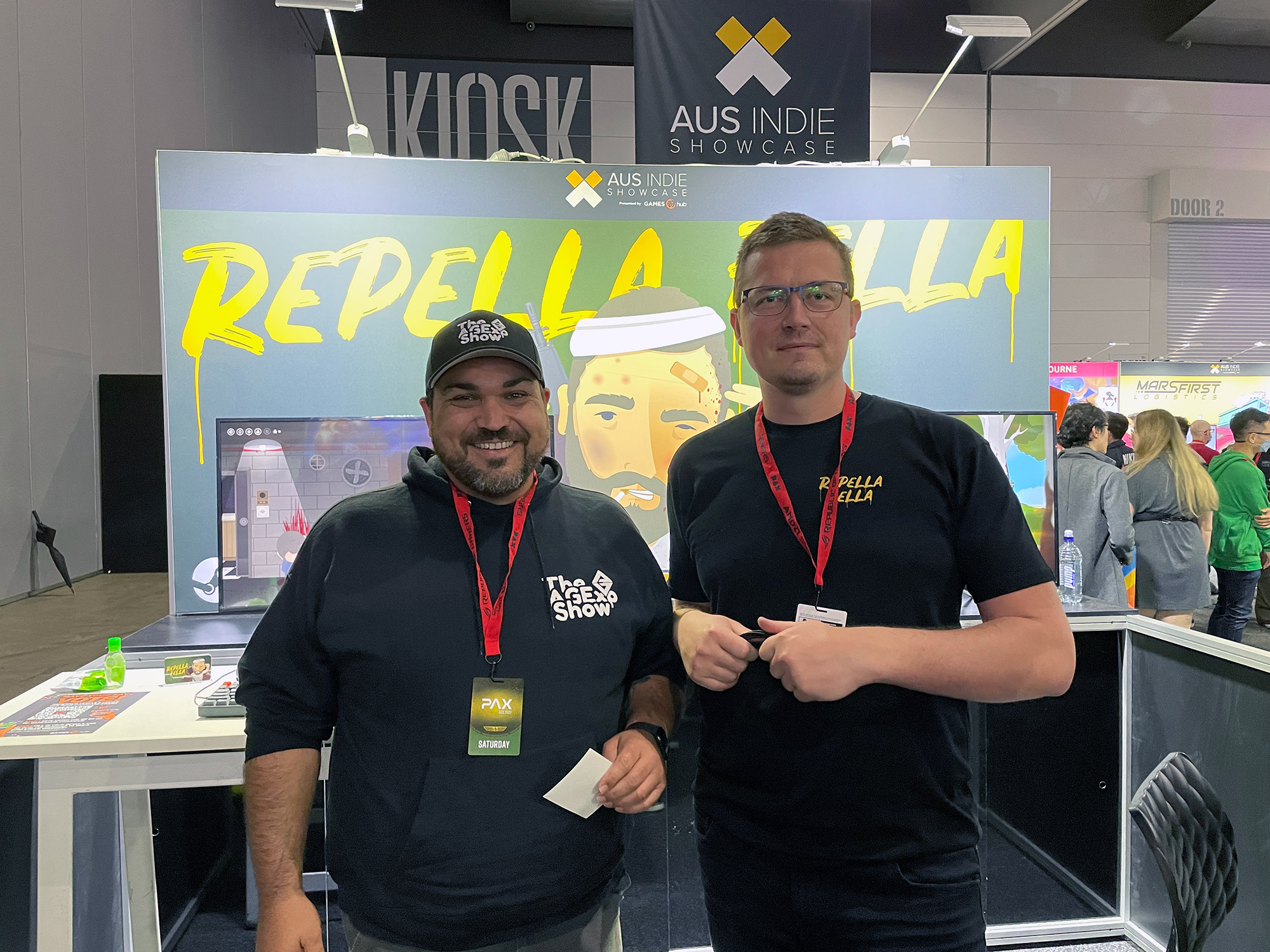 At one point I was approached by somebody who I did not recognise at all. He sounded incredibly familiar, but I couldn’t put my finger on who he might be. After a brief intro, it turned out to be one of the voice actors who had contributed to the game around 2 years ago. Neither of us knew we’d be at PAX and so it was a nice surprise for us both.

When the first day ended, I was a wreck. I hadn’t eaten all day, I was on my feet for 12 hours and there were maybe a few minutes of downtime between all the talking I was doing.

That night, just after the expo hall officially closed, the Aus Indie Showcase panel was being held. Developers from each studio were invited to speak about their games, backgrounds and the issues they faced. It was here that I learned about the other developers for the first time. 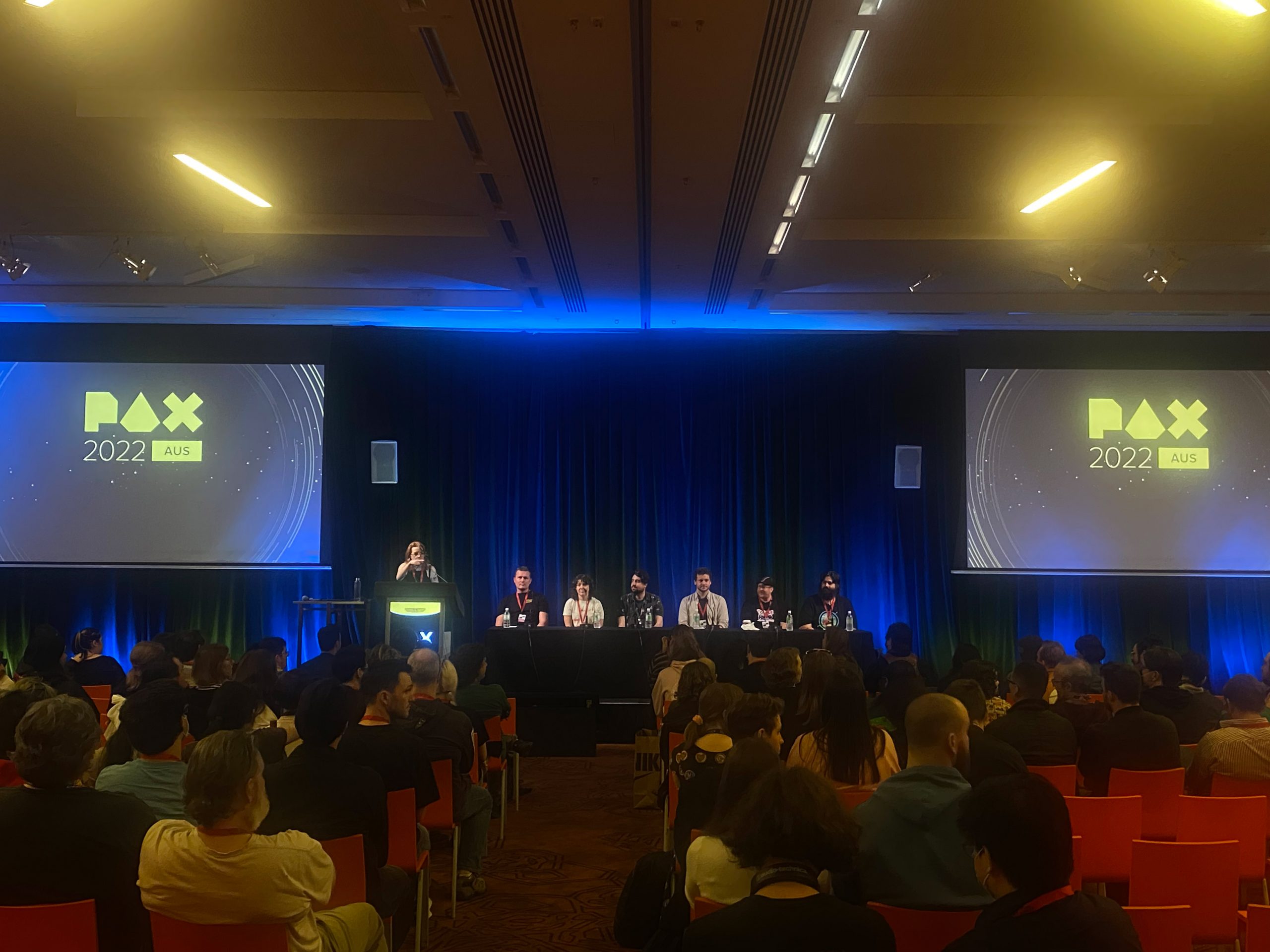 After some Q&A, we returned to our hotel room and collapsed into bed, ready to recharge for the next day.

Armed with many USB cables for our defunct wireless peripherals, we were ready to tackle day two and three.

Between handing out stickers, cards and explaining the game to visitors, I met many more people who voiced Repella Fella characters. It was nice to finally put names (and voices) to faces.

In my opinion, it’s the voices that make Repella Fella stand out. It was one of the most repeated pieces of feedback from players after all – they loved the authentic Aussie accents. And so do I! It was always a goal to create something that people weren’t used to hearing in video games. 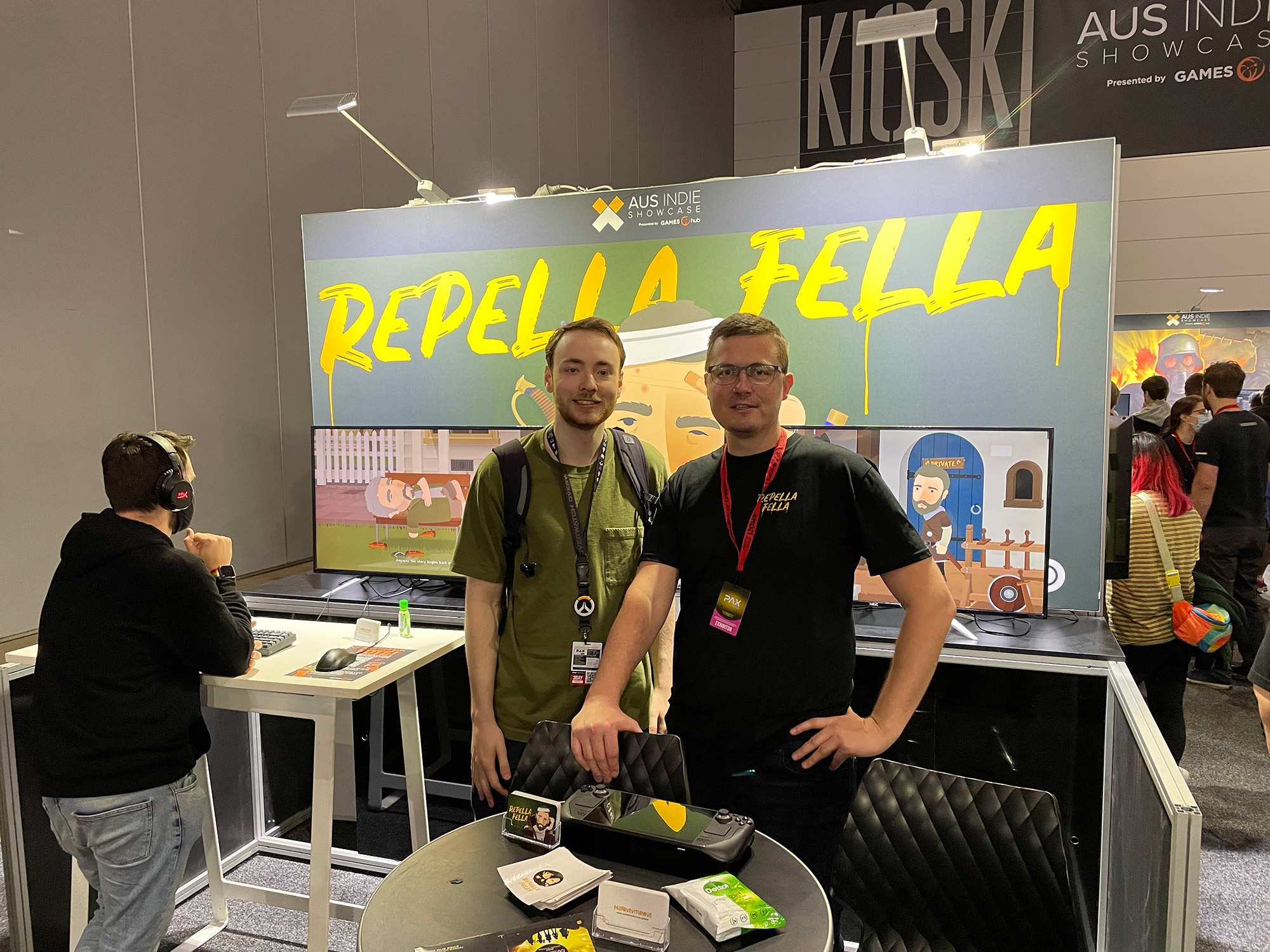 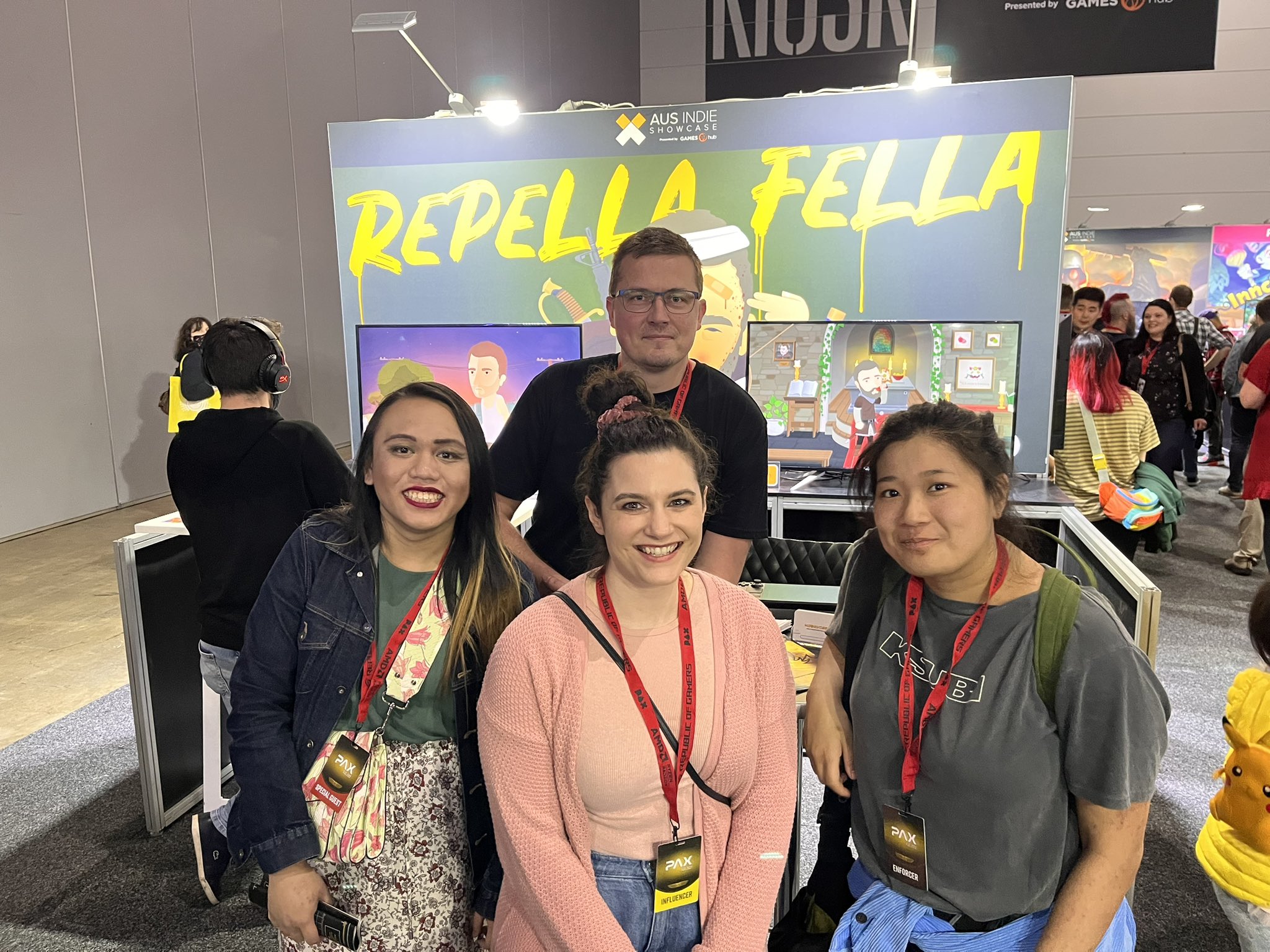 I met many streamers, indie devs, musicians, industry veterans, publishers and visitors during my time at PAX and I learned a lot. I learned that no matter how much you try to polish a game before an event, there’s going to be some annoying bug that comes back to bite you again and again at the worst possible time. 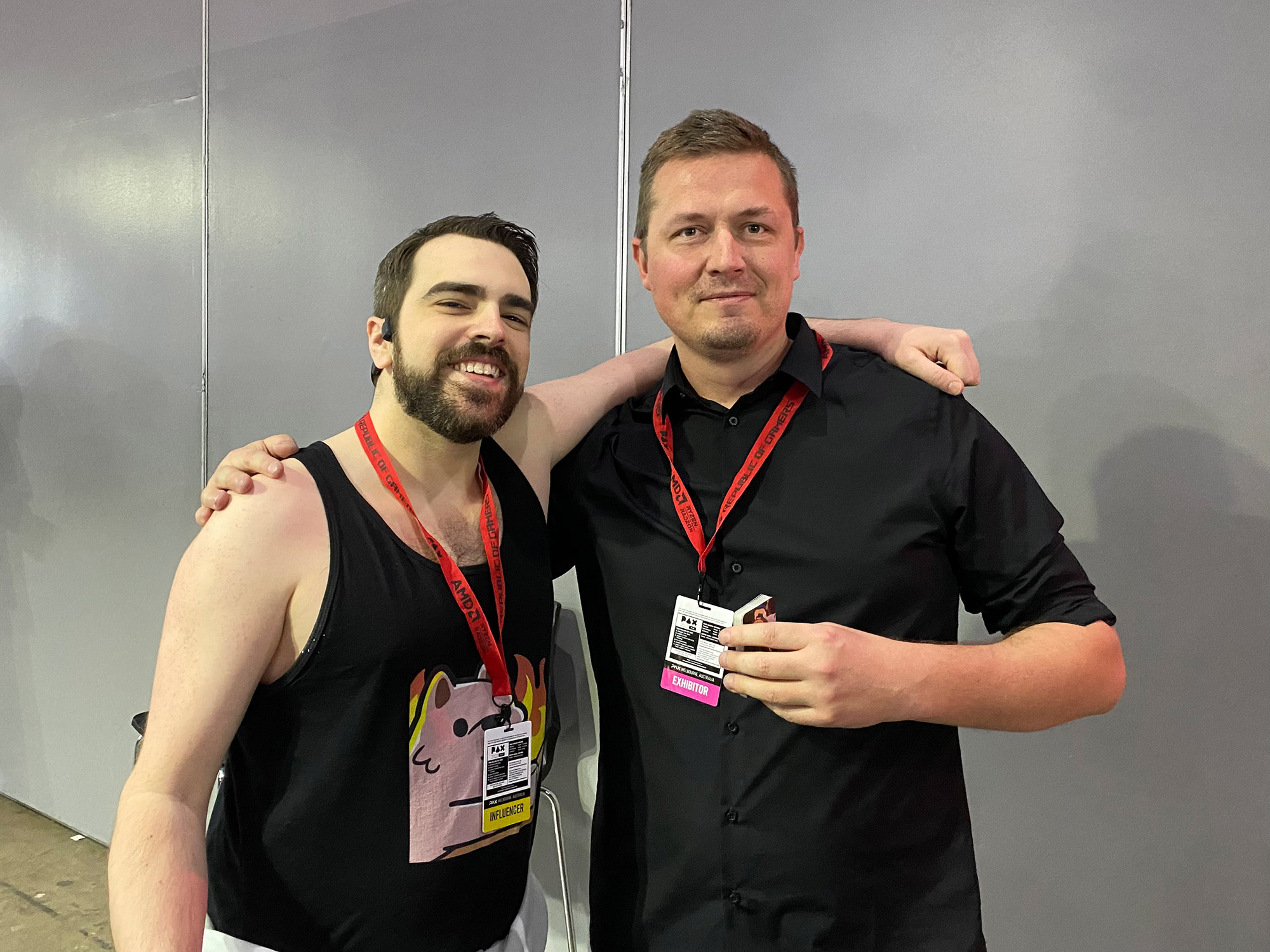 I learned that the type of game I created has more appeal than I thought. I learned that the gaming community, as a whole, is very supportive and easy to engage with. I never felt any bad vibes and everyone was always keen to hear about my solo game dev journey that lead Repella Fella to PAX.

I wish I had the chance to play and discuss the other indie showcase titles, but unfortunately my initial flight booking was cancelled. This meant the time I reserved to explore PAX firsthand, as an observer and lover of video games, was suddenly replaced with frantic phone calls and the rebooking of flights. 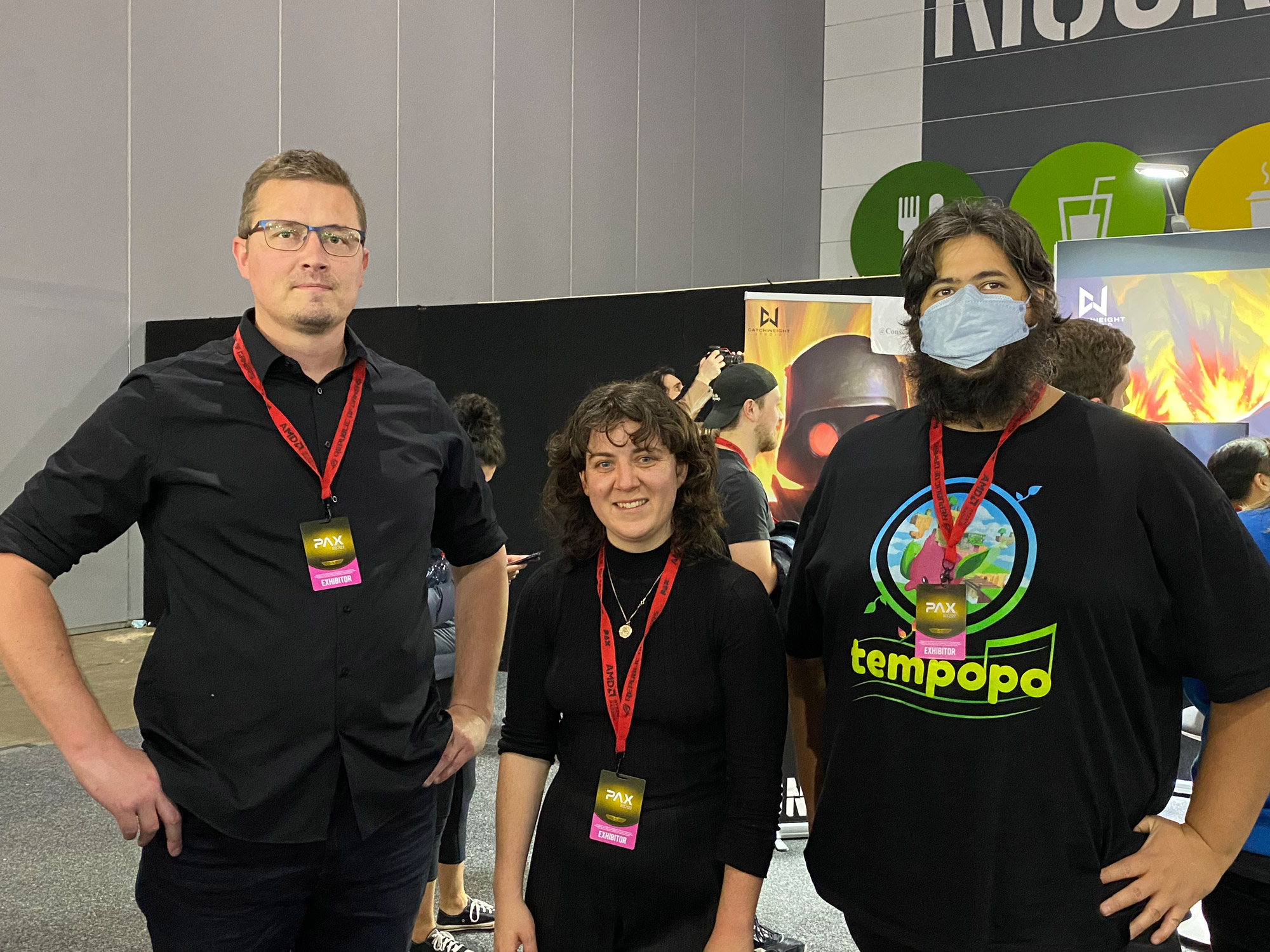 The highlights of my trip would be the other developers I met and seeing how people interact with the game that has been stuck solely inside my mind for the past 6 years. I look forward to releasing it in the coming months.

PS. I’d like to thank my brother Ray for attending the event with me. For his encouragement, coffees and work helping to organise the stand. Thanks Ray!